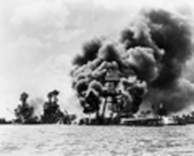 Pearl Harbor Day is when we pause to remember the December 7, 1941 attack on Pearl Harbor that precipitated U.S. involvement in World War II, and took the lives of 2,402 Americans.

It's a good time to visit with our children about the reasons a country would be justified in declaring war, and the awful price a country and its people pay when they wage war.

You could watch The Price of Freedom, a moving musical tribute to those who served in World War II and the loved ones they left behind.  It's worth making time for, as it will inspire you and invite you to reflect on the sacrifices many have made for freedom.

Sunday, December 7, 1941, began as a serene morning at the U.S. Navy base on the island of Oahu in Hawaii. The warships of America’s Pacific Fleet rested at anchor. Many sailors were preparing for church or relaxing, and all was quiet at Pearl Harbor.

At about 7:55 a.m. a buzz from the sky broke the calm as a dive-bomber bearing the red symbol of the Rising Sun of Japan dropped out of the clouds. Seconds later, a swarm of Japanese warplanes followed. Sirens wailed as explosions sounded across the harbor and black smoke poured into the sky.

American sailors scrambled to battle stations while the Japanese planes screamed in for the kill. The main targets were several huge battleships moored in the harbor. Antiaircraft guns roared to life, but they did little good. Bombs and torpedoes hit ship after ship: the Arizona, the Oklahoma, the California, the West Virginia, the Utah, the Maryland, the Pennsylvania, the Tennessee, the Nevada.

Sailors fought to save their ships, their comrades, and their own lives. Much of the California’s crew abandoned ship after flames engulfed its stern. When the captain determined the battleship might be saved, Yeoman Durrell Conner hoisted the American flag from the stern. At the sight of the colors, the sailors returned to fight the fires and keep her afloat.

Despite such heroism, the attack reduced much of the fleet to smoldering wreckage. The Japanese planes disappeared into the sky, leaving 2,400 dead, 1,200 wounded, and 18 ships and more than 300 American planes destroyed or damaged.

News of the disaster left Americans stunned, but not for long. A remark attributed to Japanese admiral Isoroku Yamamoto, who planned the attack, sums up the result of Pearl Harbor: “I fear we have awakened a sleeping giant and instilled in him a terrible resolve.”

Click here for the Text of President Roosevelt's Speech.

The Attack on Pearl Harbor

Memories of Those Who Survived the Pearl Harbor Attack

On the 70th anniversary of the Pearl Harbor attack, veterans who survived the raid recall the day.